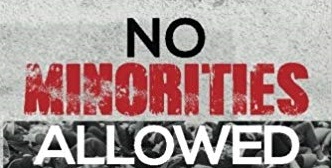 When I was a child, I lived in Salem, Massachusetts. I was born there and lived there until I was 13 years old. That was in 1999. I never really considered the percentage of race in any town, even my hometown of Salem. I would later find out that Salem was predominately white. I can recall going to school in Salem and there was a huge Puerto Rican bias. Of all the races, Puerto Ricans were the most reviled. Other Hispanics hated them out of assimilation attempts, because they were “Lazy”. Other Puerto Rican would throw their own people under the bus to not be hassled. It wasn’t uncommon to hear them say they didn’t like other Puerto Ricans. The charges ran from stealing our welfare to being just plain criminals. These biases still exist to this day in that town. Never mind anything else, from corruption to child abuse, gangs, thugs, murder and more. Salem was anything but a fun time.

My family and I moved to Conway, New Hampshire January of 2000. Conway was my first time living, or so I thought, in an all-white or predominately white town. This is when I really noticed the sea of white, as I was friends with the only black kid in the town, when his family moved in during my first year of high school.

Little did I know we would bounce around from location to location for the next four years, not really getting to spend a lot of time in anyone municipal.

Fast forward to the year 2004, the year I turned 18 and ready to get life going and start making serious bank and finishing up school. Sadly, my family and I would end up having to move one more time, this time to Biddeford, Maine. This town is 96% white, French, Catholic, which of all the religions, that one is in line with Islam, but I digress. They are also filled with a super dependent personality type and liberal when it is free stuff from them, but ironically, anti-gay marriage for years. There are the Un-Libertarian with the ideas of socially conservative, fiscally liberal. What they hell type of ideology is that?

You would figure, though, that I should have some type of white privilege still. Anyone should hire you, except that narrative doesn’t extend here in Biddeford, Maine. The concept of white privilege doesn’t exist. In reality, it is heard privilege, granted to the majority of any skin color in any community. Go to an all-black, Spanish, Asian or other ethnicity and you will be the minority or what I am calling the “New Jew.”

The New Jew is not an ethnicity, but a minority in a town where majority skin color doesn’t confer benefits to the individual based on majority privilege. The New Jew can be any skin color, any religion, any I.Q., any size, any political ideology or otherwise. Ironically, the title doesn’t discriminate, but is a byproduct of discrimination in and of itself. Regardless, since it is human nature to decimate on that which is queer and prefer the other similar grazing sheeple, you are a minority and will continue to be so, unless a new minority for the pleabs to hate moves into the neighborhood so to speak.

In Biddeford, it is mostly based on I.Q. because I live amongst a bunch of literal, sensing types on the MBTI spectrum. While predominately P types, there are also a sprinkling of guardians here as well. The sensors are notorious for doing horrible in school, now imagine dealing with that, coupled with solipsism in the negative aspect, that fact they’re irrational types, which is those that trust their gut hunches, even if they’re full of shit, like when you show them a degree from an accredited university and they still don’t believe it. You are going to do horribly from day one, because you’re not like them and being honest will equate to looking like you’re full of shit. Even interpersonal skills are overlooked as just being a douchebag. You know, they type of skills that are looked favorably upon by nearly every company in the US, yeah, that’s considered douche baggy from people that trigger over giving a politician the finger but not over rape of a child.

They self-aggrandize to the point where you considered the town might be autistic or schizophrenic, which would explain a lot. When there is so few people similar to you, which is ironic, given the fact we’re all white, it is hard to fathom being a minority among your own skin color. I’ve experimented a long time, including using the internet to gain insights into how people are in other cities and states that I cannot currently travel to, to engage people in the real world, but the same rules seem to apply. If you do not have the majority privilege, you are the New Jew and will be ostracized and dragged through the mud, like every day was Kristallnacht. Living here the last 14 years has been a personal hell, but there is a shining light which will be posted on this website for free, very soon. Pre-Crime is 14 years of my hardship, put into an algorithm from my observational findings, that are 100% provable. I’ve already tested it in this town and it has worked, show casing its power and the ability to thwart criminal activity.

One of the many reasons that I arbore living in an all-white town.I look forward to unveiling Pre-Crime to my website readers and others soon.