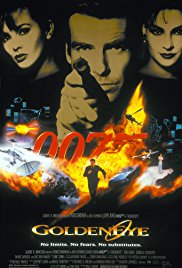 INTRODUCTION: It’s all the rage to bitch about Hollywood and its sudden “woke” culture that seems to be shoved down all the throats of the emasculated alt-lite. Annoying, efte men and the woman who sleep with those guys male friends. So whenever I see a retro movie that was “woke” by today’s standards, I am going to do my best to make sure I review to see if it just these “men” or if there really is a problem. So here is our first flick, GoldenEye.

SYNOPSIS: A whole bunch of boomers wrote a movie, that is about the fear of the soviets intentionally beating us in the digital age. A movie that was dated in 1991, when the USSR fell. Oh and James Bond is back at it, beating villains like a mutha fucker!

CHARACTERS: All original characters are there but M is a woman now and Money Penny is younger. Clearly there was need for outrage, right? This is the only thing I found in a search and it’s written by, presumably, a woman named Janet.

DIALOGUE: Fantastic! But woke as fuck! I mean, M calling Bond a misogynistic dinosaur? How about Money Penny saying he was sexually harassing her,while enjoying it.

ACTION:Hokey as fuck! I mean, the cold opener doesn’t seem to understand the concept of 3 minutes. The whole thing clocks 10 minutes. It’s almost like a parody of the old Bond flicks, masquerading with the name. What was the point of Austin Powers then?

VISUALS: Dark, but very, very good looking. Some of the
best looking of he series.

CONCLUSION: These woke movies are nothing new, but few complained back in the 1990’s, in fact, quite the opposite and while this movie isn’t nearly as good as it was in 1995, it is still a solid, albeit a slightly intelligence insulting flick. It has no good grasp on anything, from Tech to Russia. It’s only real finger on the pulse happens to be its awkward and woke moments. It is a very OkBoomer movie, but still enjoyable and it created an amazing game.