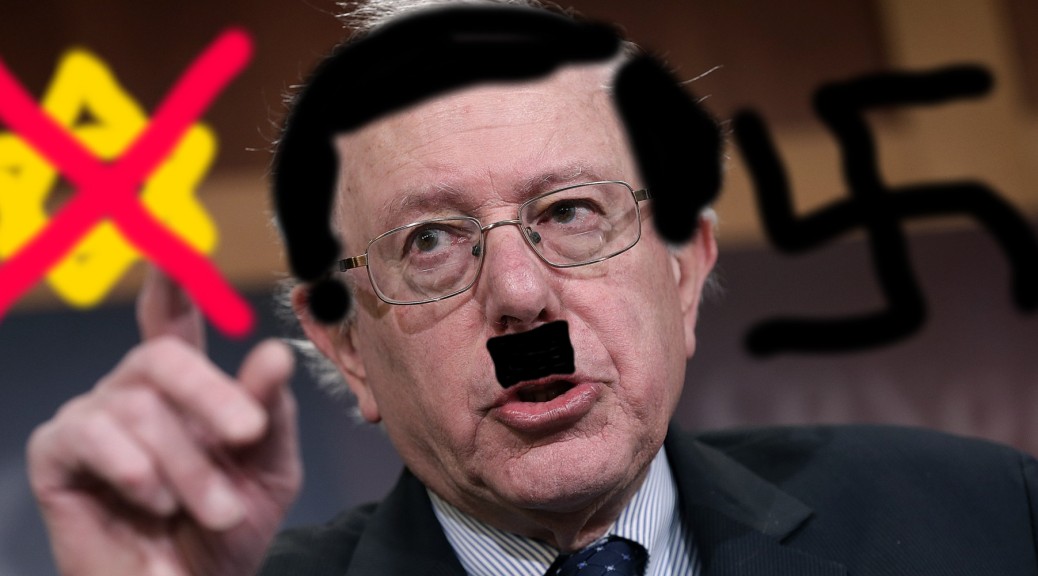 In order to understand what I am about to lay upon you, one has to have an understanding to how things were in the past. Ideology of old in the past, doesn’t mean it is currently seen the way it once was. Libertarianism, in the past, was once traditional conservatives. Oddly enough, in today’s epoch, it is now associated with Liberal ideology. Even more oddly, it is sadly becoming associated with the Alt-Right, which is absolute is not. In fact, the Alt-Right is closer to FDR New Deal liberals than they are to the traditional right and this is where we get into the gist of my essay, Bernie Sander’s is Hitler!

If you never read Mein Kampf, which you absolutely should have, if you want to consider yourself educated. Most of the book isn’t in any way, shape or form what one would consider an anti-Semitic rant. In fact, Mein Kampf is combination Biography, political manifesto and interjected opinion as opposed to a plan for the elimination of the Jewish people that it was always considered by the uneducated plebeians, that is the modern right and left. In reality, Mein Kampf is closer to your drunk lefty uncle Fred at Thanksgiving, ranting about the inadequacies of capitalism and why the rich are responsible for all the woes in the world. Sound familiar? It should, given that is Bernie Sander’s entire base and style. He’s sticking to basic structure of any leader, if you also bother to read the 48 Laws of Power!

The fact of the matter is, Hitler was an anti-capitalist, anti-communism, Boeheim artist, who traveled from place to place, never really doing much of anything and grew bitter and bitter by the day for finding no success. Being a product of his generation, and not as liberal as he claimed to be toward the Jews in Mien Kampf! In other words, Hitler was Jack Dawson in Titanic, who harbored hate towards most people, in fact, I would say Hitler was closer to being misanthropic than anti-Semitic, he ended up taking it out on the Jews for a number of reasons, some of which would include Anti-Semitic behavior was common in Germany seventy years ago, as with most nations. In fact, Jewish hated was very common in other ancient epochs as well. Some Jews actually were trying to install Communism in Germany, he reacted in order to stop it. There were some Jewish 1 percenters, to borrow a phrase from Sanders and Friends. Ultimately, Hitler saw himself as the hero an acted that way, he was Germany’s savior and nothing was going to stop his seemingly God given mandate to save Germany!

(As a quick digression, Hitler also seemingly had either a God Complex or Narcissistic Personality Disorder, Entitlement issues, typical human superiority issues, based on superficial, non-objective criteria. Among a plethora of other mental issues. None of which he shares with Bernie Sanders. Interestingly enough, Bernie seems to have no mental issues, which makes this parallel worse!)

Back to Bernie Sanders, both share a similar ideology and are very much old school, big government Democrats, pandering to the working class and working for you. Bernie was seemingly influenced to get into politics as serious study, because of Adolph Hitler himself, being quoted as saying, Because Hitler won an election that was way he took politics so seriously. Had he bothered to read and pay attention, he would know that Hitler never won an election. He lost and seized power. Also, he would know that, besides having old school leftist tendencies towards racism, Bernie and Hitler were ideologically one and the same, pandering to the same base (National Socialist Workers Party ring a bell?) with a similar style, neither one of which ever amounted to much, outside of politics and ultimately both Bitter and perpetual victims of a mean spirited, capitalistic system!

I personally believe, given the opportunity, Bernie would march the successful into death camps and redistribute their wealth in quite the same way. The leeches had always been around, looking to suck from the strong and those who dare attempt to make something of themselves in our society, and Bernie is leading the charge!

In conclusion, based on facts, Bernie is closer to Hitler than any candidate, past or present, including Donald Trump.

(Disclaimer, I begrudgingly voted for Barry Goldwater’s doppelganger Hilary Clinton, on the fact that she was, ironically, more conservative!)