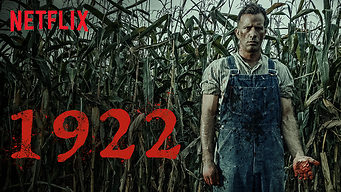 INTRODUCTION
Ho, ho, ho, merry Christmas. How I loathe this season. Idiots crowding the malls, poor people spending even more than they earn and kids acting like entitle little shits. Tis the season to be jolly, fa la la la, la la, la la. So what better way to start off Kagemas then with 1922, a Netflix “original” based on the Stephen King Novella, of which I have not read. If you love Miracle on 34th Street and other feel good family, well, you’re in for a treat, because this shit is the complete antithesis of it.

PLOT
Dude is poor with a family on a farm in 1922. Everything is fine, until plot twist, greed takes over. See, I told you this was a great choice to start off Kagemas, it is exactly what this season is about, greed, gluttony, fat ass spoiled children and annoying family members you want to kill, which incidentally, is exactly what the Punisher or Thomas Jane, if you want to get technical about it, does. Long story short, ghost, dying and rats about sum up this claptrap.

CHARACTERS
None of them are develop whatsoever. We basically go from happy family for 22 mins which leads directly to killing the wife. It is all downhill from here as his son takes a girl he likes with him and goes off ala Bonny and Clyde, both die. Thomas Jane loses a hand. The best developed characters are the rats.

STYLE
I like the cold tone it has throughout. It doesn’t look very cheap, even though it clearly was.

ACTING
Superb from all of them. Shit, too bad this movie was such fuckin rubbish and a waste of fuckin talent.

CONCLUSION
1922 is a horrible, unoriginal pile of dung, filled with shallow characters, lack of development, decent visuals and pretty great acting. Like an aging rock star, it is a shell of what it could have been, without the benefit of being a great once was.